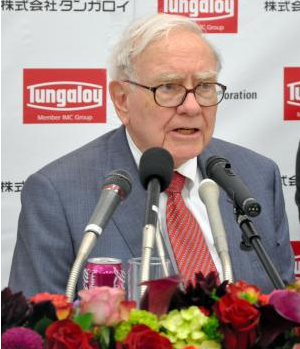 Market crash is the biggest opportunity to make money!

In order to find ways to make a big profit by buying and selling after the collapse, this time I summarized Warren Buffett's actions at the time of stock market crash.

So, if you prepare cash, you can make a big profit at the time of crash.

"Prepare cash by crash and buy stock at crash" · · · Actually, it is , "privilege of individual investor".

Because institutional investors understand this effectiveness, it is impossible to prepare a lot of cash (assuming a crash and waiting for cash in cash, it is because funds deposited from investors It is the same as playing it).

So I recommend you to prepare cash by all means in preparation for a crash.

As for Buffett,  the cash ratio is high now.

As of 2018, from the cycle of business cycle and numerous indicators, there is a voice saying that stocks may crash soon.

I also feel that way.

It is the same as the earthquake, you can not predict stock crash. However, it is possible to make a profit by acting well after a crash.

So, in order to shift the mind from prediction to countermeasures and to make a big profit in the stock, I tried summarizing Buffett 's action after the stock market crash.

Dotcom bubble collapse and the financial crisis of 2007–2008, What then did Buffett do

Next, let's look at buying timing and shares of Buffett after the crash.

Let's see the trend in the cash ratio of US stock (SP 500) from the end of 1997 to August 2018 and Berkshire Hathaway (Buffett's investment company). 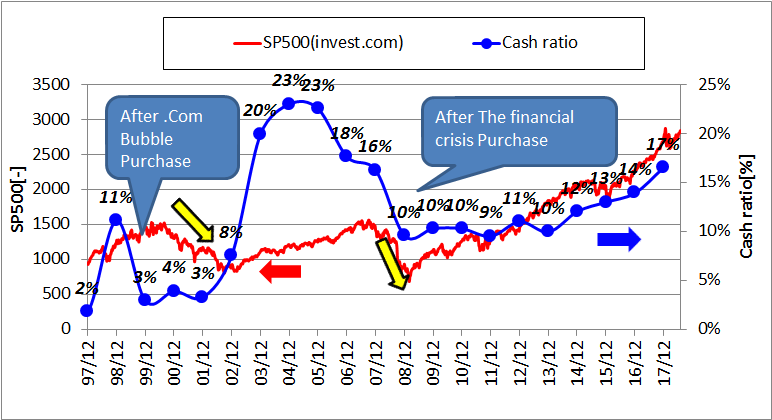 Well, looking at this figure you will see the following.

In other words, Buffett increases the cash holding rate during booming, and actively buys shares at the time of stock price crash.

Next, I will look at Buffett's performance of asset management.

Blue plot is the trend of the appraisal value of Berkshire Hathaway possessed shares. 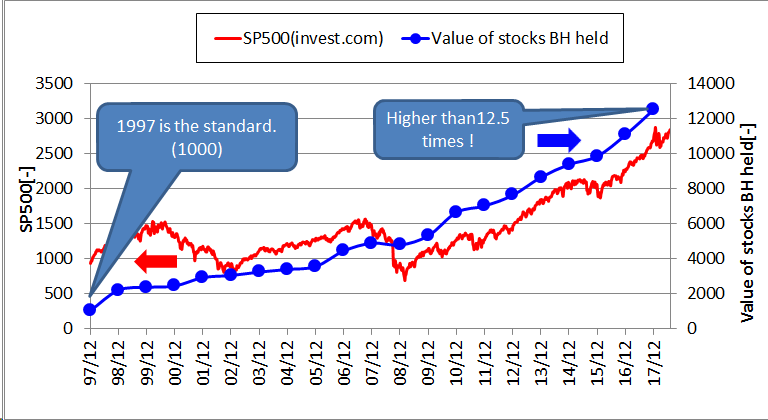 By comparison, you can see that it overwhelmingly outnotes SP 500 (SP 500 is 3 times at most.)

Company in which Buffett has traded shares

Let's see the stocks buffet buy and sell. There are 136 stocks held even temporarily between the end of 1999 and the end of 2017 where the data remains. It is difficult to discuss with this, so I would like to narrow down the stocks sold after the crash to more than $ 500 million.

Please note that because I calculated the data from the number of shares held at the end of each fiscal year, I can not grasp the stock traded within the fiscal year.

Immediately after the Lehman shock

(Berkshire bought it in 2009. Preparation for that)

What do you think? In a nutshell, Buffett's characteristic of buying and selling after two stock market crash is saying "He is purchasing large quantities of financial stocks."

· Purchase financial stock after Dotcom Bubble.
· After financial crisis of 2007–2008, purchase Goldman Sachs (Financial Stocks) and Conoco Phillips (Oil Stocks) until they sold stocks that Buffett prefers.
· If he acknowledge that the purchase of ConocoPhillips is a mistake, he sold it in 2009 and purchase Wells Fargo (Bank).

So, why buy financial stocks? I will examine it.

The answer can be understood by looking at the trend of the stock price. 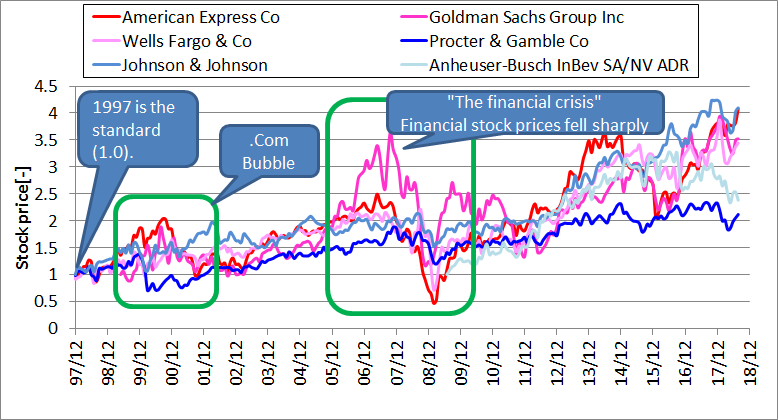 Despite this indication at the time of Dotcom Bubble, the difference between financial and non-financial stocks is small (probably because it was not a fall in stock prices from financial products).

I will also include more detailed table data.

(2)After the market collapses, he buys financial stocks,

He is profiting from borrowing in the subsequent market recovery.

Indeed, it is reasonable behavior.

Whether or not it will be able to continue in the future, however, is not it that it is a clever investment method to buy US financial stocks when the US stock slumps?

Appendix：Buffett's trading cycle is about 3 years!

Speaking of Buffett, the phrase "My favorite holding period is eternity" is famous, but in fact it seems that there are few promising stocks that can be held forever. 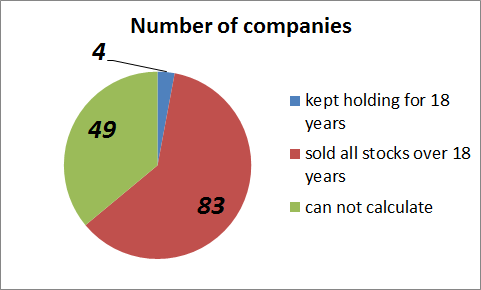 As mentioned above, only 4 companies have been held for a long time.

The classification of the number of years of ownership of 83 companies that bought after the end of 1999 and sold all shares by the end of 2017 is as follows. 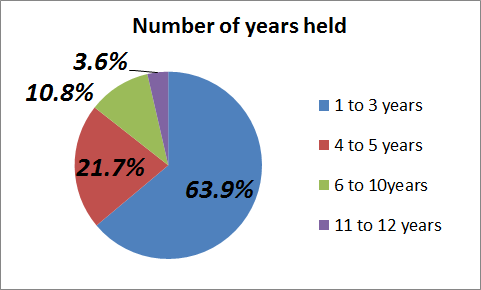 In addition, the average holding period of these 83 companies was only 3.2 years ... Short!

So it turned out that buying and selling Buffett was actually quite frequent, unlike the image.

After all it is important to try it yourself. The ideal is the eternity holding period, but sells stocks that we judge are not profitable · · · · · · · · It seems that I could understand "Why Buffett greatly exceeds the market average" in this survey.

Well then, here is the end.Were you satisfied?

Lastly, I indicate the source of data used this time.

The original data of this survey can be DL from the US Securities and Exchange Commission (SEC).It is pretty tough to summarize.

* US institutional investment company has an obligation to disclose the number of shares held quarterly to SEC. A file called Form 13F is the report, and anyone can check this report from the link below.

May the Fortune be with You!

●Go to Sitemap(Sorry, Japanese only) 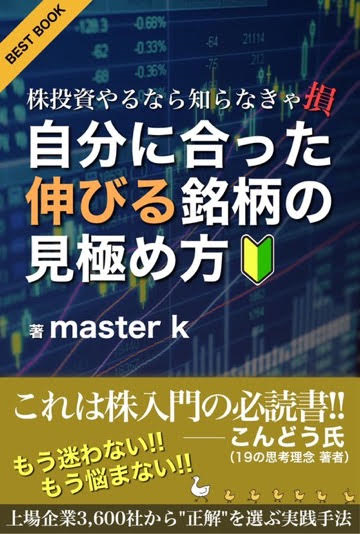